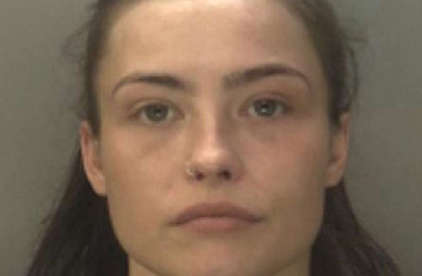 A woman has admitted racially abusing a black doorman in Birmingham city centre.

Sharna Walker, from Worcester, used racist language against the security staff member at least 10 times during the outburst on the night of Saturday 22 May.

Birmingham Magistrates Court heard how Walker responded angrily on being asked to leave the Figure of Eight pub in Broad Street, at around 10.30pm.

The 25-year-old spat drink in the direction of the doorman, kicked open the exit door causing a glass panel to smash, and then pushed the broken door into his back as he returned inside.

Video recorded by a member of the public showed Walker pointing at the victim and shouting racist abuse in his direction.

The footage was shared across social channels and sparked widespread condemnation.

She was charged with racially aggravated common assault, assault, criminal damage and a public order offence.

And Today (13 Dec) she appeared at Birmingham Magistrates Court where she admitted the offences and was sentenced to 14 weeks in jail.

Birmingham Police Chief Inspector James Spencer, said: "This was an disgraceful  incident and people were understandably disgusted at her actions.

"Our city centre police teams have been working hard with local businesses and the community to make the city a safe and enjoyable place to visit. Racist behaviour is completely unacceptable. We will robustly investigate crimes of this nature and offenders can expect to be prosecuted.”