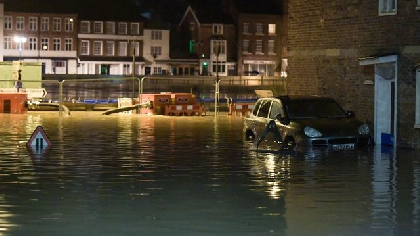 Parts of Bewdley in Worcestershire are under water after flood barriers were breached in the early hours of this morning.

The Met Office has warned that more rain is expected and there are fears that rivers in threatened areas may be yet to peak.

The River Severn is expected to reach its highest level late on Wednesday at between 5.4m and 5.6m, slightly higher than last week and possibly passing its highest recorded level - 5.56m in November 2000.

Dave Throup, Environment Agency director for Herefordshire and Worcestershire, posted pictures on social media of the river flowing over a set of barriers at Beales Corner in Bewdley late on Tuesday.

He said that, while these were not the town's main flood defences, people should still avoid the area.

At 5am on Wednesday, there were two severe flood warnings in place, meaning lives are in danger.

These cover the Shropshire towns of Shrewsbury and Ironbridge.

The White Hart, a waterfront pub in Ironbridge, tweeted late on Tuesday that the night would be "touch and go" after the Environment Agency warned the town's flood barrier could "overtop".

Photos showed parts of Jackfield, a nearby village east of Ironbridge, already flooded.

The Environment Agency said properties on Ferry Rd in the village were affected and that river levels were expected to remain high for "several days".

Flooding in central Shrewsbury forced the cancellation of train services between there and the West Midlands on Tuesday afternoon.

Further north, homes were evacuated on Tuesday after the River Aire burst its banks in Snaith, in East Yorkshire.

Despite much of the land in the area being washlands - intended to contain river water when it floods - water submerged some roads and began to threaten properties.

Residents were warned by the Environment Agency to put their flood plans into action, although no further significant rainfall is expected in the area until Friday, they added.

Caroline Douglass, director of incident management at the Environment Agency, said: "We are in our fourth week of exceptional river levels and stormy weather.

"With the effects of climate change, we need to prepare for more frequent periods of extreme weather like this.

"People need to be aware of their flood risk, sign up to flood warnings, make a flood plan and not to drive or walk through floodwater."

Met Office forecaster John Griffiths said more rain is expected across the UK during the rest of the week.

A further 5mm to 10mm of rain is forecast for most areas on Thursday, increasing to 10mm to 20mm in a 24-hour period between Friday and Saturday morning across catchment areas in Wales, Cumbria and Yorkshire, he said.

Temperatures are likely to "hover around freezing" on Wednesday morning and a yellow weather warning has been issued for ice in Northern Ireland, west Scotland, Wales and large swathes of England.

England has seen more than twice its average February rainfall, and some areas have experienced a month's worth of rain in 24 hours.

There are also 103 flood warnings and 147 flood alerts in place for England and Wales.