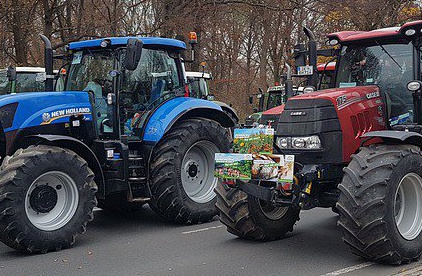 West Mercia Police are warning motorists of the dangers that may be present at this time of year as farmers are using the roads more when harvesting and moving their produce, and reminding them that extra care and patience should be taken during this important season.

Agriculture is one of the region’s key industries and this time of year is very busy in the farming calendar with many crops requiring harvest and transportation, often within a short window of opportunity in order to ensure consumers can enjoy the produce in prime condition. However, this burst of activity traditionally sees a rise in road collisions, many of which are preventable.

A significant proportion of the collisions involving agricultural vehicles occur on rural roads with 60mph speed limits, and many near turnings into farms. The typical causes of collisions are poor overtaking manoeuvres and inappropriate speed, with drivers finding themselves unable to stop in time when presented with a slow moving or wide vehicle.  Since the start of 2017 there have been 83 collisions across West Mercia involving an agricultural vehicle.

A further hazard is caused by mud and debris being brought onto the roads by tractors and other vehicles that have been working in the fields. Under the Highways Act (1980), farmers and contractors have a legal obligation to ensure their vehicles are cleared of any mud or debris before entering the public highway. Excess mud on the road is a danger to cars, motorbikes and cyclists and can change the way a vehicle handles, causing skidding, especially in wet conditions.

Superintendent Mel Crowther, West Mercia Police Force Operations comments: “Every year we face problems with agricultural vehicles leaving large amounts of mud and debris on the roads during the harvest season. While the majority of farmers take steps to ensure they keep the roads clear and safe, not all are as diligent.

“We would like to remind farmers and contractors of their responsibilities under the Highways Act and we will continue to take a tough stance against anyone who we believe is being reckless and irresponsible, this also includes other motoring offences such as mobile phone use. Although many drivers of agricultural vehicles use the roads in a responsible way, we are reminding them to be aware of the impact they can have and consider other road users while they undertake their work. During busy traffic periods, pull into a lay-by or safe place to allow other vehicles to pass safely, to avoid traffic build-up and prevent unsafe overtaking manoeuvres”.

“We would also like to remind general motorists that extra care and patience should be taken during the harvest season.  While it can be frustrating travelling behind an agricultural vehicle it’s not worth getting impatient and putting yourself and other road users at risk with dangerous manoeuvres.”

Sarah Faulkner, NFU regional environment and rural affairs adviser, said: “Most farmers and agricultural contractors do everything they can to minimise the amount of mud deposited on the road but this is a timely reminder about their responsibilities. It’s important for them to have a plan to warn other road users of hazards and clean the road as soon as possible, throughout the operation if required. There is, however, a real need for other motorists to continue to bear with the farming community and be aware of farm vehicles when out and about on the roads”.

“The NFU is working closely with the police and local authorities to raise awareness of the issues at key times of the year.”