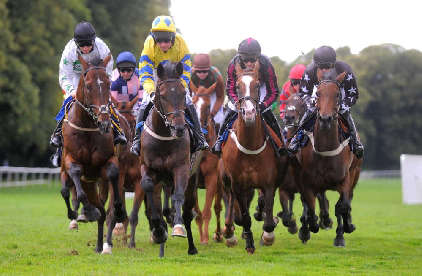 It was a day at the races for Midlands Air Ambulance Charity and guests in with a visit to Henry Oliver’s training yard, followed by a day of racing at Worcester Racecourse, to help raise funds for vital lifesaving missions.

Former champion conditional jockey, Henry Oliver, welcomed the team from Midlands Air Ambulance Charity, along with guests to his training yard and facilities in the Worcestershire beauty spot of Abberley. Guests were given a behind-the-scenes tour by Ryan Tongue from Deva Racing.

Guests then headed to nearby Worcestershire Racecourse to enjoy a VIP experience, which included a tour of the racecourse facilities, an opportunity to meet champion jockeys and trainers and three-course meal in a private box.

Pam Hodgetts, corporate partnerships manager for Midlands Air Ambulance Charity, said: “We appreciate the support of the equestrian community in Worcestershire, as sadly, on average one horse rider each week requires the enhanced critical care provided by our crews on-board our air ambulances and critical care cars.

“It was a delight to invite our guests along to Henry Oliver Racing and provide a unique race day experience for our network of corporate supporters and charity friends.”

Ryan Tongue, director of Deva Racing which hosted the day, added: “I have hosted a few race day experiences for the team at Midlands Air Ambulance Charity and its supporters. It is always an honour to help raise funds for the amazing work that the charity undertakes, whilst also boosting awareness of their contribution to the equestrian community.”

Henry Oliver, owner of Henry Oliver Racing, also commented: “With one horse rider each week requiring critical care from the advanced medical teams at Midlands Air Ambulance Charity, race days like this are important to highlight how those of us in the industry can give back to those that are there when we need them most.”

Midlands Air Ambulance Charity attends an average of 12 lifesaving missions every day across Worcestershire and the wider Midlands region.