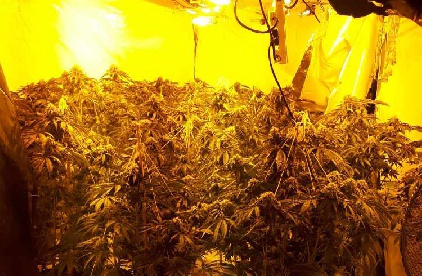 warrant at a house in Wesley Avenue, Stourport.

Inside the house officers found a large cannabis cultivation spanning almost every room in the property.

PC Sarah Francis said: “Once inside the property it was clear to us it was a large and professional operation. A man in his late 20s and of no fixed address was arrested on suspicion of cultivating cannabis and abstracting electricity and is in police custody.

“As a result of the operation, we seized more than 400 plants and growing equipment which will now be destroyed. It is clear that this house was being used as part of a wider Serious Organised Crime (SOC) operation and working with our community and colleagues we will continue to disrupt and dismantle their illegal and exploitative operations.

“SOC activity such as this is hugely harmful to our villages and towns and exploits vulnerable and often young people to grow, distribute and sell drugs which are just part of a wider criminal operation. As was the case with this action, we listened to our community concerns and we acted.

“Stourport is a safe place to live, work and visit but we know threats and risks exist from serious and organised crime. Therefore we are committed to raising awareness and doing everything possible to prevent people becoming victims. We will continue to remain committed to tackling organised criminal activity and all other forms of crime in North Worcestershire, keeping this a safe and pleasant place to live and work.”

If you are aware or think you know of any criminality such as this, if think someone is growing or selling drugs please contact your SNT or if you want to speak to someone in confidence you can call CrimeStopppers on anonymously on 0800 555111.