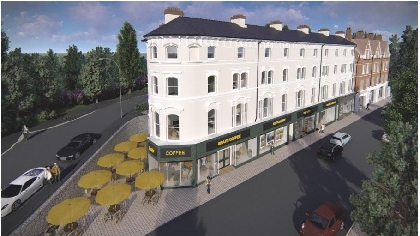 More images of how the building of former town department store Brays could look have been revealed after plans to turn the ground floor into new shops was formally submitted.

The four-storey Victorian building, which was home to one of Malvern’s oldest shops before it closed earlier this year after a century of continuous trading, would be split into four new units.

The corner unit would be converted and then opened as a cafe or restaurant to make the most of terraced seating in front of the building.

The hope is to attract more diverse and independent businesses to the town by offering smaller units rather than one large space.

New entrances would also be built for each unit with new disabled access included to the corner unit.

The people behind the transformation of the building had remained a mystery until now application forms, submitted to Malvern Hills District Council, show local businessman Richard Simmonds, partner at investors Blackfinch, sponsors of Worcestershire County Cricket Club and director of Malvern Developments, as the applicant.

Brays was one of Malvern’s oldest shops, opening in 1895, but closed in January when its owner and managing director both retired.

Worcester-based architect Nick Carroll is working on the plans and has outlined how the conversion of the ground floor is just the first part of the plans to breathe new life into the former Brays building and plans to build new apartments could also be coming forward soon.

The plans can be viewed via the planning section of Malvern Hills District Council’s website.

Consultation ends on May 30.