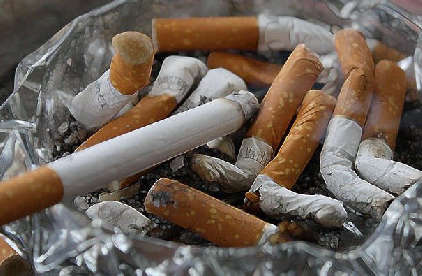 The cigarettes which are suspected to be counterfeits of popular brands could contain harmful substances, may not self-extinguish, and the sale of which also undermines public health messages about the harms of smoking.

More than an estimated £25K of illicit tobacco products were seized from various shops in Evesham in an operation led by Worcestershire Trading Standards assisted by Officers from West Mercia Police, Evesham Safer Neighbourhood Team.

Some of the illicit tobacco was concealed in a vehicle, a sophistacted concealment and in a safe and would not have been found without the assistance of the dog.

Inspector Alex Warner said: "This is a great example of working closely with our partners to disrupt organised crime in our community. Organised crime is at the heart of the trade in illicit tobacco and it impacts on local people not just economically, but also puts many people at the risk of harm and exploitation."

Councillor Karen May, Cabinet Member for Health and Wellbeing said: "This is yet another example of how our Trading Standards Officers work tirelessly with the Police and other colleagues to stamp out illegal activity in the County. Organised crime is at the heart of the trade in illicit tobacco, so it is important that these activities are disrupted. It also reduces the takings of local honest businesses and cuts the income to the Treasury which funds our public services."

Dr Kathryn Cobain, Director of Public Health for Worcestershire County Council said: "The availability of cheap illicit cigarettes and tobacco in our communities makes it harder for smokers to quit and stay smoke free. These products are significantly cheaper than the legitimate product, undermining the impact of the government's taxation pressures aimed at persuading people to quit. The availability of cheap products also makes it much easier for young people to get hold of tobacco, creating a risk to their long term health. Our Trading Standards team will continue to work hard to remove illegal products and where necessary we will prosecute businesses and individuals that ignore the law."

The businesses and individuals involved are subject to an on-going criminal investigation.

If you are concerned that a Worcestershire retailer is selling illicit or counterfeit tobacco, you can let Trading Standards know via the "Report It" page at www.worcestershirets.gov.uk or telephoning Consumer Direct on 0808-223-1133.