Operation to crackdown on speeding was huge success 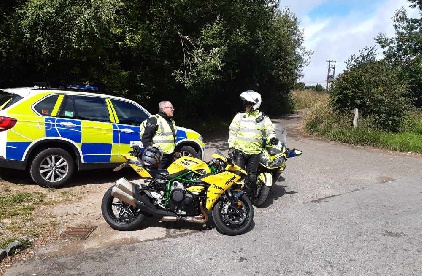 A cross county police operation to tackle speeding and dangerous driving that took place this weekend has been hailed a huge success.

On Saturday (25 July) and Sunday (26 July), West Mercia Police and Gloucestershire Police teamed up to engage and educate motorists in Fish Hill, near Evesham.

Officers stopped more than 60 vehicles and motorbikes throughout the operation with some motorists hitting speeds of nearly 90mph on the national speed limit roads.

Police made one arrest for driving whilst under the influence of drugs and seized a vehicle for no insurance.

Sergeant Stuart Allen said: “This operation was a great success and we were able to speak to several drivers and motorcyclists throughout the weekend. Our main objective was to engage and educate road users and we were able to do that over the two days.  We were also able to stop several people who were going over the speed limit and driving dangerously who will now be dealt with.

“This was a great opportunity to work with our Gloucestershire Police colleagues and we will continue to work with our partners on important operations such as this to ensure the roads are safe and address the concerns of our residents.”

PC Nick Westmacott from the Cotswold Neighbourhood Policing Team said: "Everyone we spoke to was very receptive and thanked us for making them aware of the dangers this road poses when travelling at speed. We will continue to work together with West Mercia over the coming months to police our joint borders."