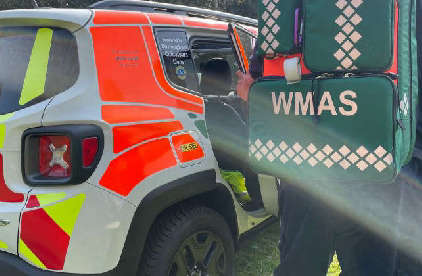 A motorcyclist received advanced trauma care from ambulance crews after a serious collision in Worcestershire on Sunday night.

West Midlands Ambulance Service was called at 7:11pm to reports of a collision involving a car and motorbike at the junction of Roman Way and George Baylis Road in Droitwich Spa. Three ambulances, a paramedic officer, community first responder and the Midlands Air Ambulance critical care team attended, which included critical care paramedics and a BASICS trauma doctor.

A West Midlands Ambulance Service spokeswoman said: “Crews arrived at the scene to find a man, the motorcyclist, in a critical condition with bystander CPR already in progress.

“Staff worked quickly to administer advanced trauma care to the patient both at the scene and enroute to hospital. The critical care team travelled onboard the ambulance to continue with treatment on blue lights and sirens to the Queen Elizabeth Hospital in Birmingham. However sadly, despite everyone’s best efforts, nothing could be done to save the man and he was later pronounced dead at hospital.

“The driver of the car, a man, was treated for injuries not believed to be serious and was conveyed to Worcestershire Royal Hospital for further treatment.”