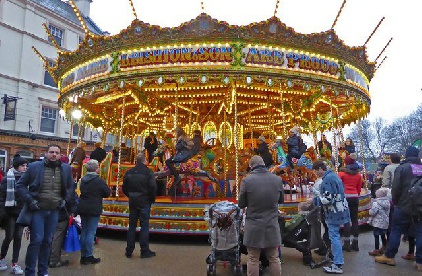 The city council’s end-of-year financial reports show the company, which has run events and markets across the West Midlands for more than 30 years, still owes the money for the last two December fayres as well as money for running several markets in the city centre.

The same policy and resources committee report, which will be discussed by councillors next week, said the city council receives £88,000 per Christmas fayre in licence fees from LSD to run the event.

The fayre has proved to be a major event in Worcester and attracts thousands of visitors every year.

The market and event operator said it could not hand over the money because of “operational difficulties” causing a drop in income.

Discussions between LSD and the city council, after the operator had asked for one fayre bill to be wiped, have yet to reach a conclusion.

Worcester City Council has also put forward £100,000 in its budget to cover part of the debt.

The report said: “The annual Victorian Christmas Fayre is managed by an external operator and the city council receives a licence fee of £88,000.

The operator, who also runs the weekly markets in the city, has, for some time, been citing operational difficulties that are causing them a reduced income.

“They have yet to pay the licence fee for both the 2018 and 2019 Christmas Fayres, requesting that the invoices for one of the fayres be cancelled.

“Protracted discussions have taken place but as yet, a resolution has not been found.

“Currently the total debt outstanding from the two fayres and the markets contract is £199,000.”

A spokesman for Worcester City Council said: “We are unable to comment at this point in time, due to the commercially sensitive nature of our ongoing discussions with LSD Promotions.”

The city council’s policy and resources committee will be meeting virtually from 7pm on Tuesday, June 9.

LSD Promotions did not respond to requests for a comment.