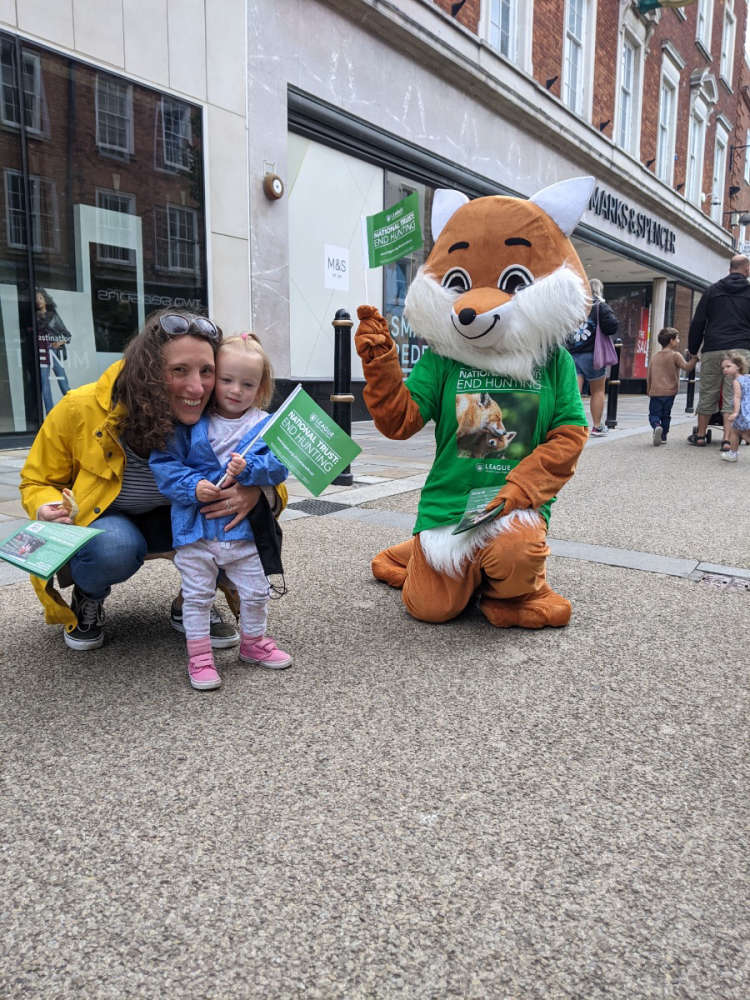 Campaigners from the League Against Cruel Sports took to the streets of Worcester today with the League ‘fox’ to call on the National Trust to stop licensing ‘trail’ hunting on its land.

Volunteers and staff from the leading national animal welfare charity, including one in a fox costume, gathered on the High Street to urge the public to take action and sign up to its National Trust campaign.

Nick Weston, head of campaigns at the League Against Cruel Sports, said: “The public really took to the League ‘fox’, with it bringing a smile to many people’s faces, and we were given an enthusiastic reception by the people of Worcester. Many members of the public were keen to be photographed with the ‘fox’ and listen to our concerns.

“We spoke with lots of local people today with the vast majority being National Trust members, and who enthusiastically signed up to our campaign calling on the National Trust to stop fox hunting on its land.”

The day of action in Worcester is one of a series of League actions taking place across the country this summer ahead of the National Trust’s AGM in October, when there will be a vote in which members will get the chance to call for a permanent ban on the licensing of trail hunting.

Nick added: “It is evident that tragically fox hunting is still taking place across England and Wales despite the ban, so we are calling on the National Trust to stop licensing ‘trail’ hunts on its land once and for all.”

Fox hunts have come under the spotlight recently after senior figures within the hunting lobby were caught seeming to admit that ‘trail’ hunting, one of the excuses they use, is a ‘smokescreen’ for the chasing and killing of animals.

The National Trust to its credit paused the licensing of trail hunting after this, but it is now time to have the ban made permanent.

A fox hunting ban outlawed fox hunting in England and Wales in 2005 but in the 2019/20 season, the League Against Cruel Sports compiled figures revealing 485 separate eye-witness accounts of suspected illegal hunting.

Through much of 2020, hunting activities were disrupted by Covid-19 lockdown restrictions. However the League still gathered figures showing 300 suspected cases of suspected illegal hunting during the cub hunting season in the autumn, although this is not something that is licensed by the National Trust.

Nick Weston added: “The overwhelming majority of the public oppose fox hunting and it’s time to consign this barbaric activity to the history books for good.”